This year we have had a very unusual spring season. With cool fronts still pushing into the area late into the month of May the water temps have been well below average! But, finally in the last few days of the month the temps have warmed up and the fish are biting! #fishbites #fightclublures 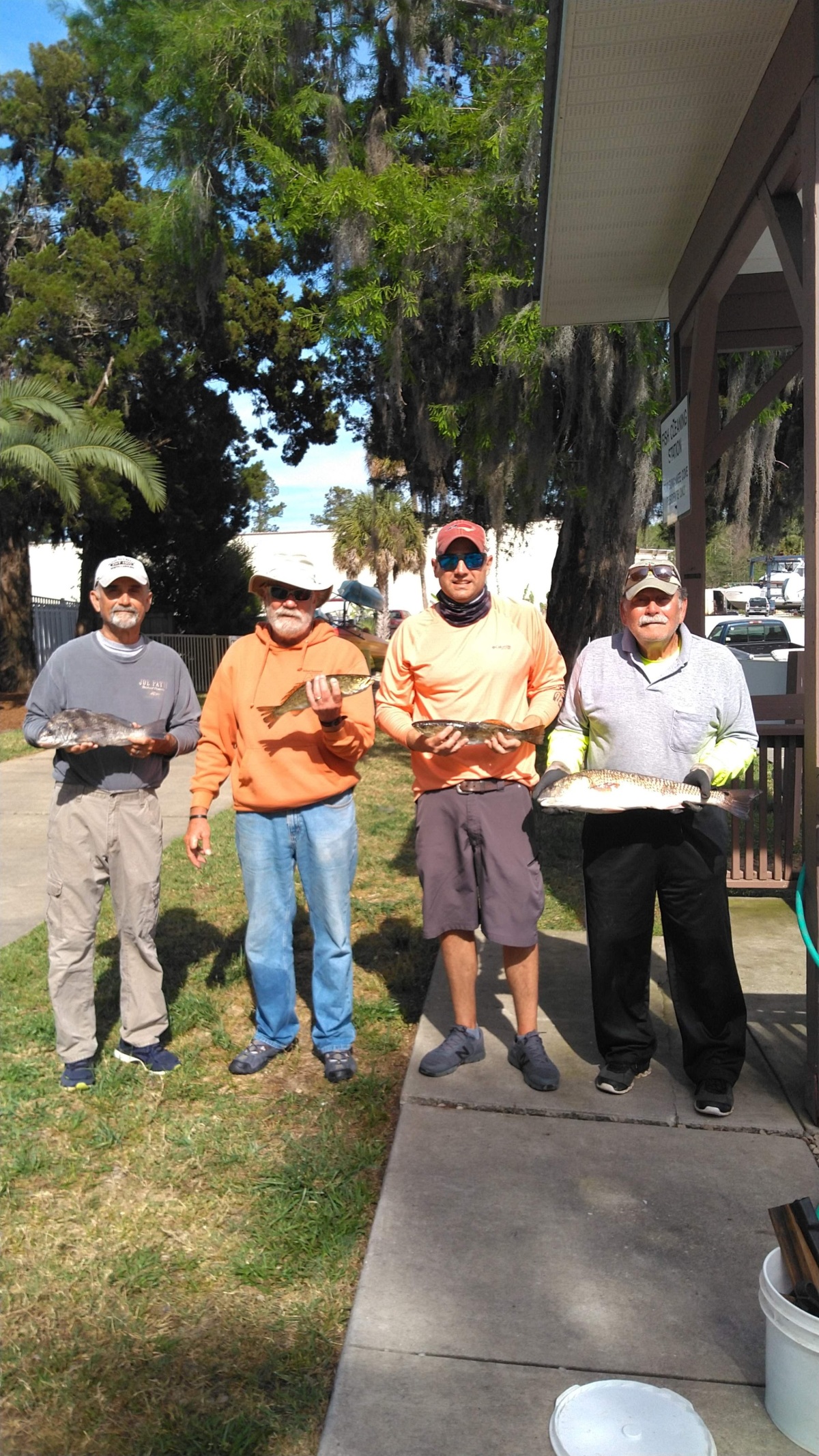 I had a great group of men from North and South Carolina fishing with me this week, Richard, Rick, Tony and Alex aka Eric.

Day 1, the week started of cool and windy with a brisk NE wind. With extra low tides in the morning, we started the day in a deep channel that runs between Cat Island and the bay laying to the South and West. No bites! We then moved to some outside bars as the tide began flooding in. We picked up a couple short trout but with the wind and tide opposing one another getting a good drift was difficult. We spent the rest of the day working our way North to the Shired Basin and then back to Suwannee, fishing from spot to spot with only an occasional fish. All in all it was a rough n windy day with the fish not cooperating. We did manage a couple of keeper speckled trout for the box and Rick hooked up on a large catch n release black drum.

Day 2, we headed out to catch some sheepshead on the offshore rock piles. Once again, the weather forecast was way off in their prediction on wind speed and wave height! We started hitting spots as we worked our way offshore, we did not find any sheepshead, mostly just small black seabass. The wind did not die down and the waves increased. After one of the guys got seasick we headed in to calmer waters. We did manage to salvage the day inshore, catching a few speckled trout, along with a bunch sand trout and whiting at the ranch bar gap. Also, there were a lot of Spanish mackerel working the area, some of them close to 24 inches long.

Day 3, we headed South to the creeks looking for redfish. We found some redfish, but we only caught one keeper, Tony caught a very nice redfish, 26 ¾ inches long. We also caught some nice blackdrum and speckled trout while fishing in the creeks. Once the tide turned in we headed out towards the south end of the Suwannee Reef, as we made the run out to the Reef we looked for tripletails but, we did not spot any. The waters on the south end of the Reef were muddied up so we started hitting spots going North looking for cleaner waters. Tony was hot that day when he caught about a 20lb catch n release blackdrum before we headed North. There was not much activity on the Reef that day. About a mile up the reef the water was not as muddy but, was stained with river water. We went by the ranch bar gap and caught some more big sand trout and whiting on the incoming tide. Then we finished the day around the Pelican Bank and in towards Axe Island, we managed to pick up a couple nice trout and another big Spanish mackerel before the end of the day.

A big thank you to Richard, Rick, Tony and Eric for coming to Suwannee and fishing with me for those three days! I look forward to fishing with all you again!

A big boy with a big Redfish!